Celebrating the 20th Anniversary of the Blitz Build 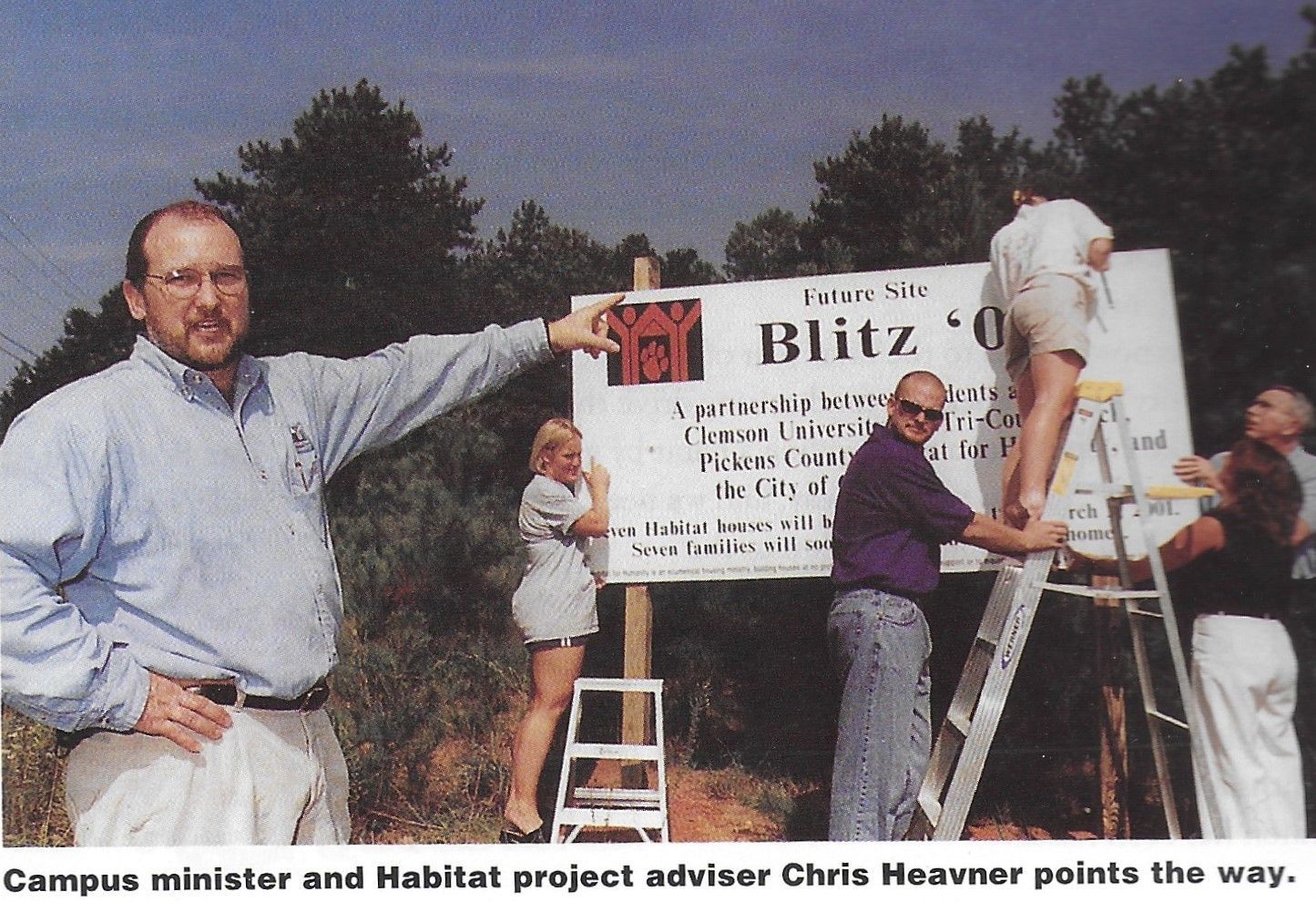 Twenty years ago, several community groups in Pickens County, S.C. came together to create an opportunity for affordable housing for families in Clemson. The project was a joint effort between Pickens County Habitat for Humanity, the City of Clemson, Clemson University, Habitat for Humanity at Clemson University (the student chapter), students from Tri-County Technical College, and countless others.

This project is known as the Blitz Build, an event in which multiple houses are built in a short period of time. In this case, five houses were built in the two weeks from Feb. 17 – March 3, 2001. This remarkable feat was the first student-led Habitat for Humanity Blitz Build in the U.S.

These Clemson students already had years of experience building the Homecoming house on Bowman Field for 10 days each October. They decided they wanted to do something even bigger. So, they spent a year and a half planning this new challenge that took shape as the Blitz Build in February 2001.

The Rev. Chris Heavner, retired Campus Pastor of University Lutheran Church, was Faculty Advisor to the students of Habitat for Humanity at Clemson University. He said the idea to do a Blitz Build came from the students’ need to “add oomph” to what had been done for Homecoming.

“The Blitz Build idea was born out of a combination of wanting to build multiple houses simultaneously with the land opportunity from the City,” he said. “It was a coming-together of many different key people and disciplines.”

The students’ desire to build multiple houses coincided with a land opportunity presented by the City of Clemson. The City applied for and received a $400K Community Development Block Grant. These funds were used to purchase the six-acre property on Forest Lane in Clemson and provided the necessary infrastructure for the land that was developed for the Blitz Build.

Habitat donations funded the houses, which cost about $45K each at the time, and Habitat partnered with the families who would become homeowners. The student leaders created plans for architecture, construction, and land preparation. And 4,000 volunteers provided the 10,000 hours of labor it took to complete the two-week Blitz Build which resulted in five new homes built as affordable housing for qualified homeowners.

Wayne Watson was one of the students involved in planning the construction as part of his graduate work to earn a master’s degree in Construction Science and Management. He acknowledges the efforts from multiple sources to make this plan a reality.

“We had to work with the city to make the whole thing work. They brought the money, they brought the grant,“ Watson said. “There were so many different pieces – with the City, the University, Habitat International, Pickens County Habitat, the Clemson University chapter, the Lion’s Club – just getting all those different groups together to figure out who’s doing what.”

Arlene Young, former Community Development Director for the City of Clemson, remembers the students’ enthusiasm for the Blitz Build as invigorating. She points to ongoing communication as the key to successfully working together to accomplish the goals of the project.

“It was a Blitz Build, so getting all the effort that needed to be coordinated in that short amount of time was a challenge,” she said. “Constant communication was key, and everybody was willing to do what it took to get it done.”

But the project was not without its challenges. Many remember that the build site began as a “gulley,” and a “kudzu valley” before it took shape as a neighborhood and wondered if they were ready for it. Heavner remembered that they had to carry things in and out of the site because trucks couldn’t yet make it down the steep and slippery hill.

Rachel Collins, who earned a bachelor’s degree in Parks, Recreation and Tourism Management, focused on the logistics of the Blitz Build, coordinated activities with the University, PCHFH, the City, and others. She remembers the start of the Blitz Build as a muddy mess.

“It was so. darn. Muddy! It was unbelievable the amount of mud that got all over everything we owned,” Collins said. “It was such a pain then, but it’s something I can laugh about now.”

Laura Altman was one of the student leaders who helped to plan the Blitz Build as part of her senior exit project in Architecture. Although she had already graduated by the time the event took place, she took a week off work to come back to Clemson to help build. She remembers the challenge of laying out the street and creating access.

“I had to work with the grading changes, which was a challenge because of the hill,” she said. “We had to figure out how to navigate it because you can’t go  straight down the hill, it has to be a certain grade.”

Tom DiAntonio, a Computer Engineering graduate who became involved with Habitat due to the influence of friends who were involved through the Lutheran Campus Ministry at Clemson, remembers the challenge of getting student participation.

“We wanted it to be student-led, but we also wanted a lot of students to work on it,” DiAntonio said. “It was a challenge with every Homecoming house too, once the house was off of Bowman Field, it was ‘out of sight out of mind’ so getting students out there when they’re not seeing it in front of their faces all the time – that was kinda tough.”

Watson recalls the difficulty in finding enough qualified adult supervisors to help oversee the building of each house. Many regular Habitat volunteers from around the area and other parts of S.C. came to help, but more supervisors were needed.

“We were trying to find house supervisors and we tapped out all the local affiliates. So, there’s a group who travel the U.S. in RVs for months at a time going from site-to-site building Habitat houses,” Watson explained. “To finish out our house leaders that we needed, we had a bunch of caravanners come from all over the U.S. to fill in.”

And it wasn’t all over after the two-week Blitz. Those first two weeks were focused on framing and roofing. Then came the opportunity for other students from around the country to work on the houses during their spring break in an event known as Collegiate Challenge. After that, additional volunteers continued to work on the houses to completion.

Visit from the Co-Founder of Habitat for Humanity

Millard Fuller, co-founder of Habitat for Humanity, was personally invited by Clemson students and attended the dedication ceremony at the conclusion of the Blitz Build. He described the student volunteers as history-making “pioneers,” since it was the first time students led such a project. Fuller’s visit had an impact on DiAntonio, who says Habitat involvement is part of what defines who he is and led to lifelong friendships.

Heavner remembered that many people – community leaders, faculty members, media personnel – wanted Fuller’s time and attention at the dedication ceremony. But Fuller’s interest was in the homeowners who would occupy the houses. He knew they were the reason why Habitat exists and the driving force for this project.

“When Millard Fuller came for the dedication, everybody was vying for his attention,” Heavner said. “But he gave the greatest attention to the future homeowners of these houses. It was a reminder of why we did it.”

For Watson, the residual effects of working on the Blitz Build are the enduring relationships and the heart for service that develops as a result of volunteering with Habitat.

“It’s not just ‘the Blitz Build,’ we did this thing and it’s over,” he said. “It is lifelong service that came into the Blitz Build and leads from that.”

Collins gained leadership experience that she credits to her involvement working on the Blitz Build and working with Habitat.

“Something I learned and took away from the experience all these years later: I don’t have to do it all myself,” she said. “You can do a lot of things behind the scenes to help others in their role. Leadership isn’t all about your own success, but helping others be successful.”

Because of her work with Habitat, Altman learned how to balance design and function in her residential designs, something she continues to be mindful of in her architecture firm.

“Something that building with Habitat develops, is the relationship with the construction side. It’s not just design,” she said. “I can draw from a background of using my hands to understand the build process.”

The City of Clemson received the Municipal Association of South Carolina Achievement Award to recognize the students and community leaders who participated in the Blitz Build as an effort to provide an affordable housing solution.

Although this Blitz Build occurred 20 years ago, the long-term impact continues. Some of the original homeowners still occupy those houses. Leadership lessons were learned by the students – skills they continue to practice today in their careers. Students from diverse backgrounds formed lifelong friendships because of Habitat involvement. And an adjacent property, Stephens Road, was purchased following the Blitz Build which provided lots that PCHFH continues to build on today.

The mission of Habitat for Humanity is to put God’s love into action, to bring people together to build homes, communities, and hope. The Blitz Build was a great example of this love for each other and service to our neighbors. The legacy of this event is evident not only in the fond memories of the effort, but also in the ongoing relationships and acts of service that continue to fulfill Habitat’s mission for years to come.